Wishing for a Do-Over at the Podium 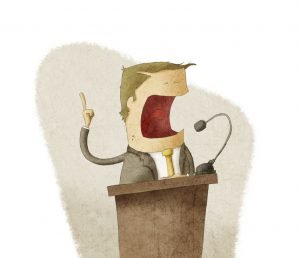 It’s also an easy trap for event planners to assume successful people are good speakers but there is absolutely no connection.

I learned this in a painful way when I invited a brilliant entrepreneur to speak at Interact Studio to an audience of 25.

“Jim” had built a great business and reinvented his brand successfully. He had been recognized for his accomplishments and was speaking at events all around the city. We were all looking forward to learning from his insights.

Although I hadn’t heard him speak, I knew that Jim’s rebranding of his business was relevant and interesting so I assumed he knew how to engage people. Assumed.

He began at the dreaded beginning, “And then I…”

As soon as I introduced him, Jim began at the dreaded beginning and commenced to drag us through the timeline of his trek to success with all events linked by the words, “and then I.”

He talked about his contracts, awards and prowess in winning investors. Within the first few minutes people began to shift in their seats and look quizzically at Jim.

For me, it was excruciating. How could I have let this happen? I’m not only the event planner, I’m a coach!

I should have done better by Jim and my guests.

Jim was a bad speaker, not a bad person. He had a fascinating story if he had gotten to it.
I am still wishing for a do-over.  If I could go back and coach Jim, I would work with him on how to bring value focusing on these four areas:

1. Make the audience the hero.

Jim could have invited listeners to see themselves in his words—such as, “Think about the most significant way your market has changed since you started your business…for me, the biggest change we were facing was…”

Instead his talk was only from his own perspective.  There was no room for anyone else.

The foundation of an effective message is a positive regard for the audience that carries the desire to bring value. Great speakers always find the answers to this question: Who will be in the room and what do they care about?

I should have made certain Jim knew that the people who came to hear Jim speak were entrepreneurs who had weathered the Recession. They came in hopes that Jim would be generous and give them an insight or two.

They would have been delighted if he had distilled his lessons learned into a few how-to suggestions for navigating change.

3. Recognize the wisdom in the room.

Gracious speakers understand that there is a collective wisdom in the room that knows more than any one individual.  Jim was so focused on his own success that he didn’t ask his listeners if they would share their successes. Instead, he gave us a lecture on how to do it “right.”

People are up to their eyeballs with data and detail. What they’re looking for is a meaningful story that reveals something about the big picture—such as, the personal challenge Jim overcame in letting go of the temptation of defending his original idea.

The most compelling speakers will allow themselves to be vulnerable.

Don’t clear the room like a fire alarm: be brilliant

You know you’ve delivered value when people are energized and linger to speak to you about taking action.

As soon as Jim was finished, the studio cleared out as though someone had set off the fire alarm.

I should have coached him to wrap up his time with us by giving us some actionable gold nuggets. Mea culpa.

It’s an easy trap to imagine that as a speaker, your job is to be brilliant. But the message we will listen to and remember will never be about your brilliance. It will be about the meaning and value you brought to our world.