What Should I Do With My Hands When I Speak? 5 Tips

Home / Interact Studio Stories & Articles / What Should I Do With My Hands When I Speak? 5 Tips 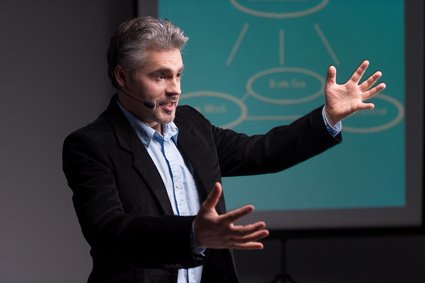 One of the most common questions I hear is: what should I do with my hands when I speak?

And I have good news for you; the answer is easier than you might think.

Picture the last time you saw a compelling speaker—it may have been during a TED story, a keynote address, or even a product launch (with someone who loves innovation, such as Steve Jobs).

Do you have a mental list of those behaviors? Great—now let’s explore five tips for gestures that will give you power, credibility, and authenticity in front of the room.

Step One: Step Up to the Plate

And by plate, I mean “home base.” It’s a position of standing tall with your feet about hip-width apart and your elbows at a 90-degree angle with your hands gently touching in front of your waist.

“Home base” is simply a place to rest your hands between meaningful gestures. It’s the “white space” to which you can return whenever you need to signify a transition, pause, or rest after a purposeful movement. It’s also a great position for starting and ending a talk. It creates a bookend that gives the audience a peaceful open and a comfortable close to the journey your audience has just taken

Early in my career, I was completely unaware of my hands when I spoke. It was as if I had grown those two appendages in the eight seconds it took me to walk to the front of the room, and I flailed them like a baby discovering her arms for the first time. And the kiss of death for me? Holding a marker in my hand. While it may have (unconsciously) soothed me, the click-click of removing and replacing the cap was a potent distraction to my audience. It wasn’t very powerful or purposeful.

Instead, I would have been infinitely more powerful if I had started from home base (without a marker in my hand) and gestured naturally when a point in my talk warranted it.

For example, an intentional movement such as spreading my arms wide to indicate a large gap in market share or rolling my hands forward to show progressive movement in our project plan would mean that the audio matched the video, and that helps make a message sticky and meaningful. And it adds visual interest in service to the story—that draws people in and reduces the risk of the attention dip.

Bonus tip: Moving with intention not only applies to hand gestures—it applies to your lower body, too. Take intentional steps. Ditch the podium and use the full stage. Picture the room like a baseball diamond, and set a goal to visit all 4 bases (in any order) throughout the talk. You’ll get closer to the audience and command the room while dispelling energy: it’s a win-win!

Memorizing a speech or reading aloud to an audience is neither powerful nor authentic. And it certainly isn’t memorable. Neither are over-rehearsed gestures (after all, it isn’t a Broadway performance). Instead, prepare your key points and use stories, analogies, and descriptions that trigger the senses. Then use the room to PLAY BIG —allow your gestures to add emphasis, color, and meaning to the talk. Natural gestures compliment your story.

Practice being the moment. Practice natural and intentional gestures. Practice a few different home bases to see which one best serves you. Practice without (hiding behind) a podium. Practice on camera and watch it through the lens of your #1 fan supporting you and playing to your strengths.

Step Five: Replace Anything That Doesn’t Serve You

When you watched the video of yourself, did you happen to notice anything that didn’t serve you (such as my absent-minded marker mayhem)? Great—that means you’re perfectly human (with energy you can channel into behaviors that serve you). Resist the urge to stop a behavior.

Our minds dislike a vacuum, and it becomes easy to focus so much on what we want to stop that we actually perpetuate it. Instead, decide what you could do to replace that behavior with something more powerful, and try that instead. For example, if you find yourself pointing at the audience aggressively, replace that with an open-palm sweeping gesture. It’s that simple.