Tony Mecia, the founder of The Charlotte Ledger, is the recipient of the 3rd Annual Interact Community Voice Award, which celebrates leaders and organizations whose authentic voice creates positive change and contributes to a bold, inclusive Charlotte community.

As the founder and executive director of the small but mighty business newsletter called The Charlotte Ledger, Tony Mecia is doing smart journalism and fact-based local news for the city he loves.

If you think that sounds like a throwback, you’re only half right. “A throwback in one sense, but more like a new vintage of good wine,” says Mecia.

As a lifelong journalist and former reporter and business editor at The Charlotte Observer (1997-2009), Mecia has been watching disruptions in the newspaper business from the front row.

Five years ago, the Charlotte Observer downsized dramatically and moved its editorial offices to the NASCAR building on South Caldwell Street, just around the corner from its home of 89 years. The iconic Charlotte Observer headquarters at 600 South Tryon Street was demolished and redeveloped into office space.

“What happened to the Observer was about the business model,” says Mecia.“Not the need for local news.”

When Mecia left the Observer he worked for The Weekly Standard but the publication closed in 2018. He could have gone back to freelancing. He could have moved to Washington D.C. or New York, but he didn’t. Instead, he looked around the city he’d grown to love in his 25 years as a resident, family man, reporter, and editor.

“Local news had gotten weaker,” says Mecia. “The number of business reporters was declining. I knew there was an opportunity to do better, smarter news. If Charlotte was going to be a world-class city, we needed to have a better media environment.”

In addition to “business-y information,” as Mecia calls it, The Charlotte Ledger explores any event that is important to Charlotte but is going uncovered.

For example, The Ledger shed new light on sexual assault allegations at Myers Park High School. “That’s one of the longest articles we’ve ever done,” says Mecia. “People were interested. There was a big reaction. It’s nice to know there’s a market for that.” 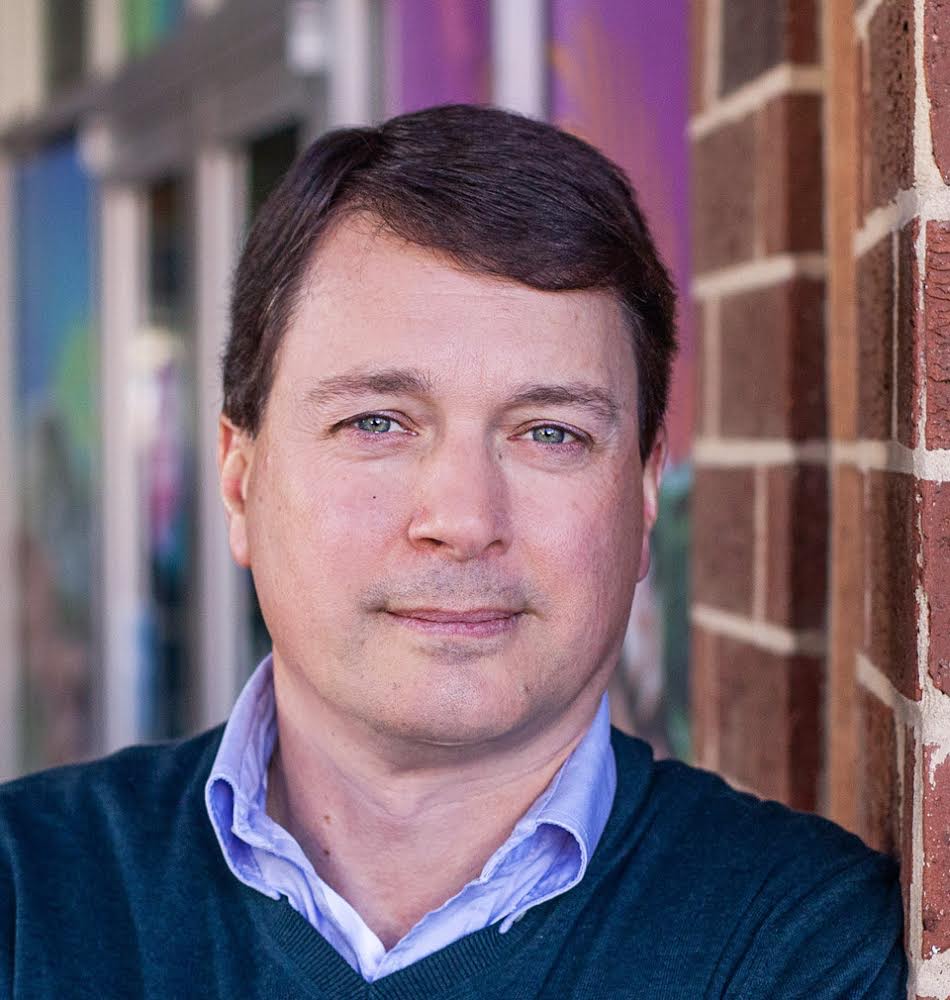 Tony Mecia, the founder & editor of The Charlotte Ledger

The Charlotte Ledger also steps up to cover stories that other outlets haven’t given much if any attention to, such as enrollment declines at CMS schools in south Charlotte, and the liquor shortage at North Carolina ABC stores.

If you check the article bylines, you’ll notice that The Ledger draws on Charlotte’s most trusted journalists and Mecia’s former colleagues from the Charlotte Observer to write articles. It’s not unusual to see something by business columnist Doug Smith, political reporter Jim Morrill, food writer Kathleen Purvis and religion writer Ken Garfield.

Let’s go back to the new vintage of good wine. The new vintage includes innovation and collaboration. “We’re not afraid to try new topics and see what works,” says Mecia. We’re nimble enough that if we want to do something, we do it. We don’t have to have a meeting to get corporate approval.”

“Flyover Friday” is a video collaboration between The Charlotte Ledger and The 5 and 2 Project. The series gives subscribers drone video tours of Charlotte developments while hearing from the developers as guides.

“Transit Time” is a weekly edition that covers the city’s transit plan, which is one of Charlotte’s top civic issues. This newsletter is produced in collaboration with WFAE and the UNC Charlotte Urban Institute.

“The old newspaper view was that you should cover everything and pretend that you’re the only source of information, says Mecia, “The truth is, people use several different sources.”

“We like to share resources and acknowledge other people who are doing good work,” he says, “We have a bunch of collaborations going on.”

Those collaborations include ones with WFAE 90.7FM, the UNC Charlotte Urban Institute, LaNoticia, The 5 and 2 Project, QCity Metro, and The Biscuit from Charlotte Is Creative. 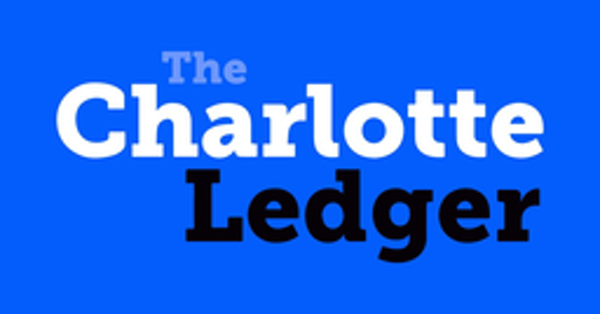 Cristina Bolling joined the publication as managing editor in April of last year. She sees her work as connecting residents with news and stories that help them make sense of their city. Bolling has a 20-year career (2000-2020) at The Charlotte Observer, where she won numerous awards from the N.C. Press Association and the Society for Features Journalism.

Mecia is humble about his achievement with The Charlotte Ledger and reluctant to claim success, but he admits that “things are working out” and it’s nice to see the numbers going up.

“I am surprised by the connections that you can make when you care about actual news,” says Mecia, “I am meeting so many people that otherwise I wouldn’t know. A lot of people come to me and give me ideas.”

“We’re building community. We’re trying to do good work and people are buying in. We can have better, smarter, local media in Charlotte.”

Join Us for A Very Special Edition of the Human Touch 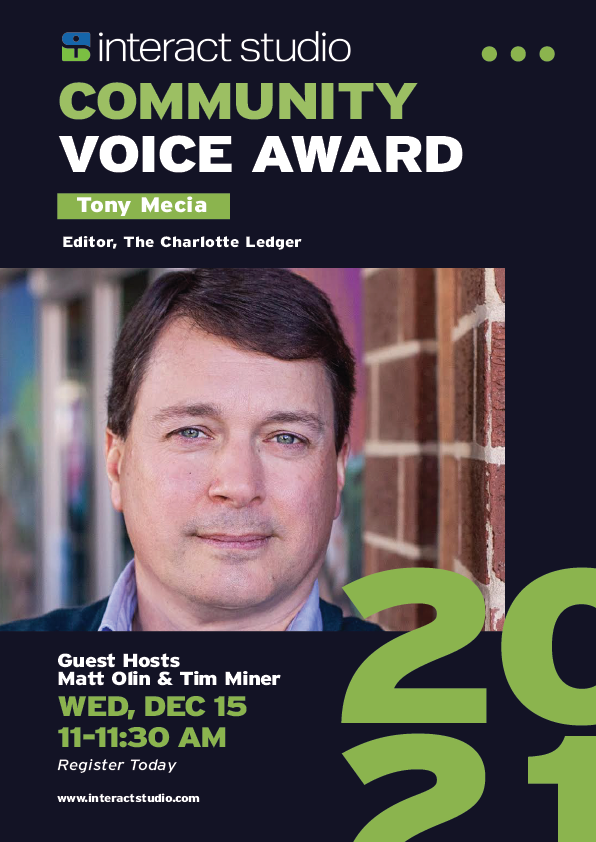 Each month Interact Studio hosts a virtual gathering called the Human Touch where we are joined by our favorite authentic communicators. On Wednesday December 15 at 11:00am EST, Tony Mecia will be our guest speaker for the program. Join us as he shares more of his story and we honor him as the recipient of the 3rd Annual Interact Community Voice Award.

We will also be joined by Matt Olin & Tim Miner, the co-founders of Charlotte Is Creative and frequent collaborators with Tony in Charlotte’s media landscape. They will conduct the interview with Tony.

Tony Mecia has written articles for a number of local and national publications, including The Washington Post and The Wall Street Journal, and has won national business reporting awards for his coverage of manufacturing, airline and telecommunications industries. He holds a bachelor’s in political science and history from Duke University and a master’s in journalism from the University of North Carolina at Chapel Hill. He lives in Charlotte with his wife and three children.