The Planner with a Plan and a Twitter Feed

One of Charlotte’s greatest 2020 accomplishments began with a tweet!

I’m reposting again…imagine for a few minutes that we can “art-ify” the intersection of Trade and Tryon with “Black Lives Matter!” And leave it in that space for 2 weeks. Wouldn’t that send a strong message?! https://t.co/YTgc4ZmvTu

Within 24 hours of the tweet being posted our friends from Charlotte Is Creative emailed Taiwo with a list of artists “ready to do this right now.” Three days later, the landmark Charlotte Black Lives Matter Mural was born.

The mural transformed our city in a profoundly important way. Taiwo said on his Twitter page on June 9, that an elderly African American said to him, “I never believed this could happen in Charlotte in my lifetime.”

Taiwo Jaiyeoba is Charlotte’s Assistant City Manager and the Chief City Planner, a role he has held since 2018. As his Twitter bio says, he has a “passion for seeing people and places transformed.”

You can learn a lot about a person from their Twitter feed. Taiwo’s feed is a treasure trove of reality, aspiration and ideas about people and places: 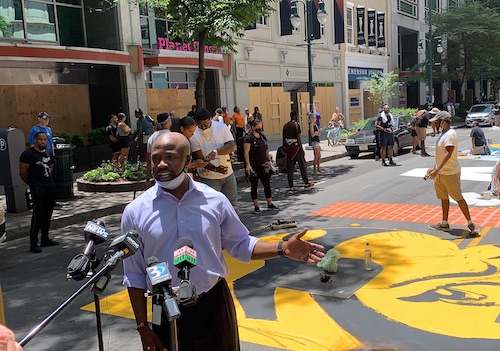 If you need a reading list, you can find it on his feed. Taiwo uses other cities as examples for Charlotte — from Nashville to DiVinci’s plan for Milan after the bubonic plague.

His 2020 post links to city planning efforts including the Charlotte Moves Task Force report and its focus on transportation, multimodal networks and mobility, the Charlotte 2040 Plan, the first master plan for growth since 1975. All of his efforts are focused on equity, sustainability and placemaking.

In a 2018 Charlotte Magazine interview, he described himself as a Sesame Street kid who loved the song, “Who are the people in your neighborhood?”

If you want to know about Charlotte and its neighborhoods, follow Taiwo Jaiyeoba (@winnerspath).

Hear The Story From Taiwo Himself

Taiwo joined us, alongside Charlotte Planning Coordinator Monica Holmes and Charlotte Is Creative Co-Founders Matt Olin & Tim Miner, on a July 2020 episode of Human Touch. They shared the story of the mural’s creation and what the project meant to the city of Charlotte.

If you have an important story of your own to tell, we can help you create a clear message that connects. Learn more about our various programs here.

2020 was a year where social justice issues were in the spotlight and Taiwo Jaiyeoba helped give those issues a stage. His key role in making Charlotte’s Black Lives Matter mural possible helped give artists, activists, and the Charlotte community a space to share their voice. The project’s completion was a moment that the city of Charlotte won’t soon forget.