Steve Kornacki Is A Newsroom Chart-throb 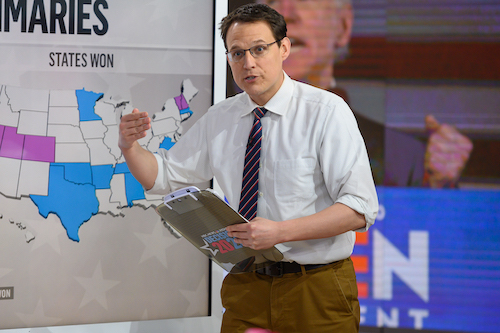 In the first week of November, a star was born. Over at the other networks, suited anchors stepped to the map and gave us vote counts, calmly and professionally (I see you John King) day after day after day.

Then there was NBC, MSNBC, CNBC and a whirling, khaki-clad dervish named Steve Kornacki, doing math in his head, scribbling on the “big board.” And the country went mad for it. We were nervous and excited and so was Steve. And he was ready to break it down for an anxious nation.

As the coverage stretched from Tuesday to Wednesday and then Wednesday through Thursday, one thing did not change – Steve’s wardrobe and his energy level matched – hot mess!

You don’t often see khaki’s on network news, but Steve had them. You don’t often see a rolled-up sleeves button-down and a 1980s striped tie, both wrinkled; the only thing that would make him more Revenge of the Nerds would have been tape on his glasses, but our hero was too cool for that.

And he developed a cult following. Comedian Leslie Jones was obsessed (if you don’t follow her on @Lesliedogg on Twitter, you should. Her commentary over the news commentary is four-letter word, room rater rivaling gold). Chrissy Teigen worried about his health and her own after days of viewing.

steve are you ok what does this even say pic.twitter.com/QlWI5U1NRo

And as the internet does, the internet figured out the source of the khaki pants; they come from Gap and are a color called palomino brown. Sales exploded. In fact, Gap contacted him and offered him a lifetime supply; he declined saying that a pair lasts him five to 10 years, so on Giving Tuesday, Gap contributed 500 pairs of khakis to the Boys and Girls Club Workforce Readiness program in honor of Kornacki. Love that goodness.

NBC’s Sunday Night Football picked him up to analyze playoff scenarios and People included him in their Sexiest Man Alive Issue.

As I write this on January 6, I’m watching him back at the map for report outs on the Georgia Senate election. It is a good thing; fame hasn’t changed him a bit.

Steve Kornacki is undeniably his authentic self at all times. If you want to tap into your authentic voice, we can help you learn how to present yourself in a way that is it true to you. Learn more about our various programs here.

The khaki-clad Steve Kornacki became a newsroom favorite during the 2020 Election for his wardrobe, his impressive mental math skills, his depth of knowledge on the election, and his radiant, authentic personality. We’ve never seen someone make county demographics so interesting.