Almost a year ago, I wrote about New York Governor Andrew Cuomo who, at that time, was being called America’s Governor for his clear, direct communications to his state and the country about coronavirus response. We weren’t alone. The best publications in the land published laudatory profiles. In retrospect, I maintain that his communications were exceptional in filling a gap of clear information about the virus.

But Cuomo’s star is rapidly losing its shine. He took a “victory lap” too early by writing a book about his successful response. After months of questions about nursing home deaths, he acknowledged that numbers had been misrepresented. Political figures spoke out about his bullying manner, including members of his own party. And day by day revelations about sexual misconduct are further damaging his reputation and his future.

His brother, CNN’s Chris Cuomo, has acknowledged that he can’t cover this story (while the network does) even though he frequently hosted his brother for serious and funny segments early in the pandemic.

There are some things that are true:

You can read the original article below and read our follow-up on Cuomo’s crisis management missteps here. (Updated on 3/3/2021)

A Playbook on Leadership Communications

Why do most of the nation’s news channels carry his daily press briefing live every day? The state of New York, particularly New York City, is the epicenter of the COVID-19 outbreak. But there is more. Governor Andrew Cuomo embodies the leadership communications style that our country is hungry for. And he brings it in every press briefing and tv interview.

He uses the tried and true techniques of great speakers to inform and inspire, and he breaks some rules with aplomb. Let’s explore: 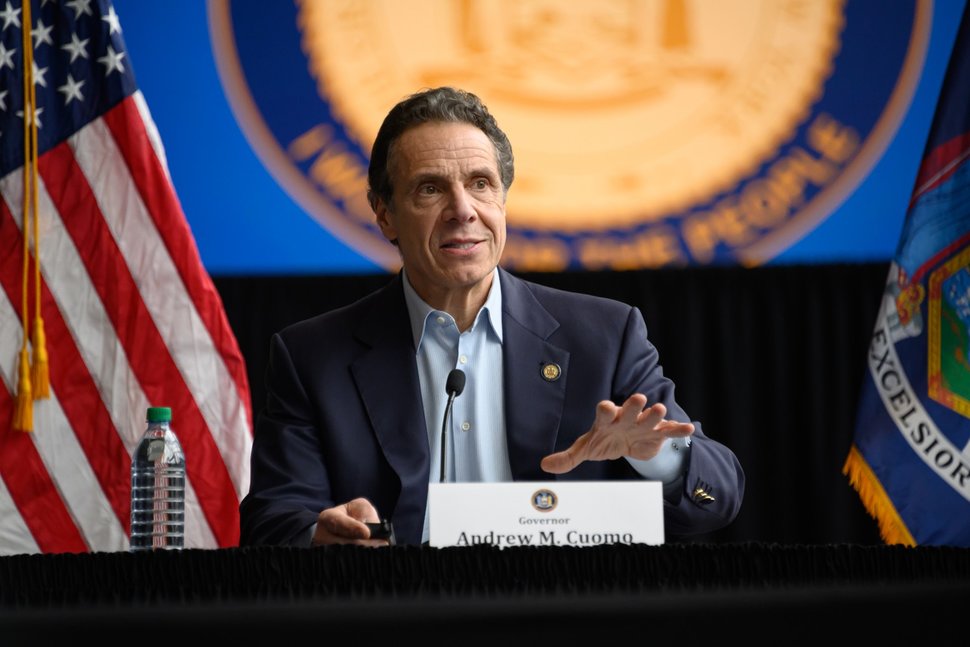 When talking about the challenge of testing and contact tracing in his April 14 briefing, Andrew Cuomo said:

That’s what we have to work on, and we have to do that together. We have to do as a government what our people have done, right? Sometimes political leaders can learn best from following people who are normally ahead of the politicians. Look at how people have been selfless and put their own agenda aside for the common good. Can’t their leaders be as smart as they are? The answer has to be yes.”

He talks about cabin fever and his dog, Captain. (Spoiler Alert – They are getting on each other’s nerves.)

He uses PowerPoint effectively (words I never thought I would write).

This is apparently a norm Andrew Cuomo has had since he was a Cabinet secretary under President Clinton. He presents with PowerPoint, but he does it masterfully, in a geeky sort of way. The slides generally prompt him to speak extemporaneously about the few words on the screen, but he also uses them to show data – when you talk about flattening the curve, it helps to see the curve.

When he was warning young people, who were ignoring social distancing requirements, the slide bullet read “You are wrong.” 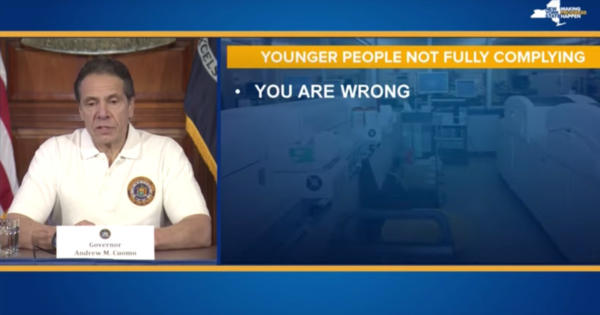 When he is using the analogy that a “chain is only as strong as its weakest link” to show the interrelationship between hospital beds, medical staff and supplies, the graphic makes that point: 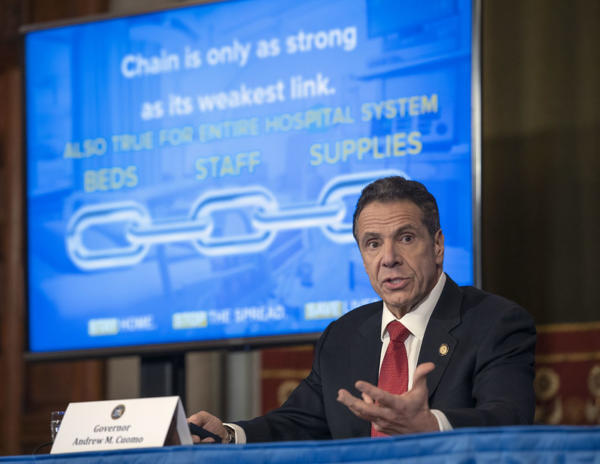 And when talking about Personal Protective Equipment donations: 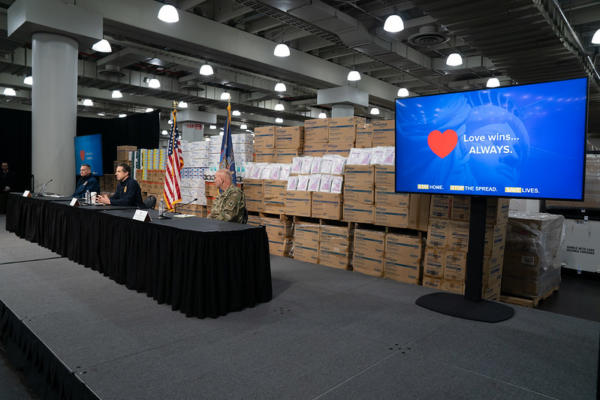 When talking to young people about the importance of physical distancing he brought his daughter, Michaela to the press conference and talked about advice he had always given his daughters:

Governor Andrew Cuomo: “But, I did say to all three of them, from as soon as they could crawl, I used the one line. What is the one line I used to say?”

I remember those last few weeks, a lot of studying. But, that’s a shift in life. But she was going to take a vacation on spring break and go with friends and take a trip and risk, reward. Luckily, she made the right decision and I’m proud of her for that. No prompting from me, besides the question: risk, reward.”

When talking about “where we are” in our response, he quotes Winston Churchill. “Now this is not the end. It is not even the beginning of the end. But it is perhaps, the end of the beginning.”

When talking about what went wrong, he quotes George Santayana by saying, “Those who do not remember the past are condemned to repeat it.” Then adds, “I don’t want to repeat what we just repeated, what we just went through over this past month.”

Here he talks about the need to mandate the state’s “PAUSE.”

Cuomo named the sheltering provisions designed to protect seniors and vulnerable populations Matilda’s Law after his mom. He talks with deep affection and some exasperation about his three daughters. When announcing Matilda’s Law:

“I call it Matilda’s Law. My mother’s name is Matilda. Everybody’s mother, father, sister, a friend in a vulnerable population – this is about protecting them. Protecting them. What you do, what you do highly, highly affects their health and well-being. The instinct to love – I want to be with them. I want my kids. Mom wants to see the kids. Be smart. My mother and your mother.”

And he is never funnier than when he spars with his brother, Chris, on the junior Cuomo’s show, Cuomo Live. Brotherly love at it’s best. And the Saturday Night Fever outfit is a little embarrassing.

On Monday, April 12, Andrew Cuomo returned 35 ventilators to a nursing home in Upstate New York. And like all good guests, he brought food, cookies baked by his daughters.

“And that a nursing home would come forward, unsolicited, gratuitously, and say we want to lend 35 ventilators in case our neighbors downstate need them. What an incredibly beautiful, generous gesture. I want to say thank you on behalf of all of the people of the state. The family of New York we talk about. We talk about that we’re a family, upstate, downstate, we’re all one family. That family is there to support one another and I want to say thank you on their behalf.

Be better, be more generous, more gracious, more loving. Get to that level. That’s what Pathways did, and they did it for me and I wanted to say thank you very much. Thank you and God bless you.”

If we can help you channel your internal Cuomo, let us know at info@interactstudio.com or contact us here.