Carolina’s all-time leading receiver Steve Smith is one of the most talented players fans have ever watched play the game. His face is instantly recognizable to Carolinians.

So, when it showed up on the local NBC affiliate recently, everyone paid attention. He was clearly upset over a lack of planning from Charlotte-Mecklenburg Schools for a remote learning plan for the district’s homeless and at-risk students.

For many watching the story that night, it was the first time they had even heard Steve speak for homeless kids or any of the community needs served by the Steve Smith Family Foundation.

But Smith has been helping the greater Charlotte community for years. He and Executive Director Gerard Littlejohn work largely behind the scenes to provide hope and inspiration to those in need and advancing causes that are close to the heart of the founder’s family. 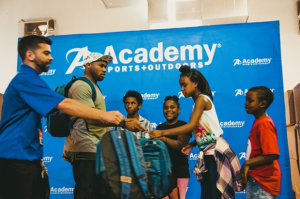 Littlejohn joined us on Human Touch this summer and told us the story of how Smith gave a young man a chance to run his organization. He is so honored to be a part of the Foundation’s deep reach into the community. Growing up, Littlejohn was one of the at-risk kids he is helping today.

“Number one: These students are our community. They all belong to us. And number two: What can we do to help fill in the gap? We are not going to let these kids fall through the cracks. Research shows low income students are typically two years behind middle class students when it comes to the education gap.” ~Gerard Littlejohn

Since Steve Smith’s interview aired, CMS has announced its contribution of $116,000, which will provide 100 children the opportunity to receive eight weeks of virtual learning assistance, technology, school supplies through the Steve Smith Family Foundation.

Watch the full Human Touch episode with Gerard below.