Have you ever wondered how an extraordinary collaboration comes together?

First you have to go back two years. Charlotte’s city government lacked a permanent planning director for more than three years. But in January of 2018 a visionary named Taiwo (“Tai”) Jaiyeoba was named Assistant City Manager and Director of Planning, Design and Development with the City of Charlotte.

That same year, the City’s Placemaking Program launched with the mission of using urban design and placemaking to transform public spaces into vibrant places for people to express their love for the community. Meet Planning Design & Development Program Manager Monica Holmes, who can out-hustle anyone.

With these two creatives in place, standing at the ready, fast forward to June 5 of this year. A two-block-long section of 16th Street NW in Downtown Washington, D.C. was renamed Black Lives Matter Plaza by Mayor Muriel Bowser. The Department of Public Works had painted the words “Black Lives Matter” in 35-foot yellow capital letters, along with the flag of Washington, D.C., as part of the George Floyd protests. 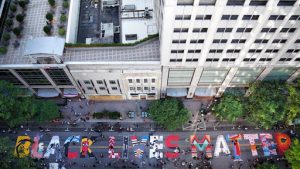 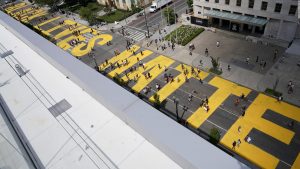 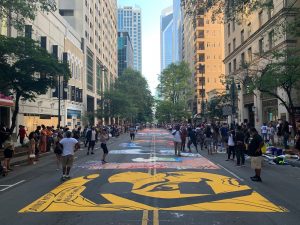 This sparked Jaiyeoba’s imagination. “When I saw what was happening in D.C. I thought, how can we build on that story and make it unique to Charlotte? Can we bring in artists and muralists from our community?”

He sent Holmes an email on a Friday evening and challenged her to come in with the plan, which she did by the next morning. Jaiyeoba believes a very important part of his job is to empower talented people like Monica to create. “The best way creatives can exhibit their talent is to let them run with it,” he says.

The dominos were in place. Holmes dove head-long into logistics and execution. Tryon Street, the very heart of the city, was chosen as the location for Charlotte’s BLM Mural. Holmes drove collaboration with every stakeholder within the City of Charlotte, from the Legal Department to the Department of Transportation.

Enter friends and co-conspirators Matt Olin and Tim Miner, founders and executive directors of Charlotte is Creative (CIC). “We were grateful for the trust to step into the collaboration,” says Miner.

CIC champions the power of creatives and creativity in Charlotte. They are working to help transform Charlotte into a city that draws people in, excites them, and inspires them to invest their financial, social and creative capital. They brought in the crucial collaborators to complete the partnership and insure the artists were people of color.

What is the city but the people. –William Shakespeare

This is what collaboration looks like. On June 9, 2020 a team of 22 mural artists and countless helpers led by Brand the Moth and BLKMRKTCLT in partnership with Charlotte Is Creative and the City of Charlotte painted a universal truth on Tryon Street between 3rd and 4th Streets: BLACK LIVES MATTER.

From the moment of the first brush stroke, it became a sacred place to reflect on the world’s cry for social justice. 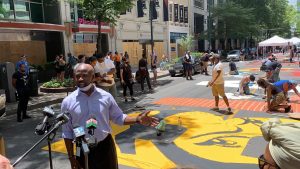 “Once we could imagine it, dream it, see it, we reached out to our relationships and let the community run with it and make it a reality in our city.”  –Tai Jaiyeoba

“We knew it would be important, but we didn’t have any idea as to the impact that it would have,” Jaiyeoba says, “A moving moment for me happened when I spoke to an African American man on the street and he told me he didn’t think he would ever see this in Charlotte in his lifetime.”

Where do we go from here? We’ll see. Charlotte’s BLM Mural was originally thought to be a two-week project. But the bold colors remain in the heart of Charlotte, and the streets will remain closed through September.

So how does such an extraordinary collaboration come together overnight?

Tune into this very special Human Touch episode below – this endeavor was truly magical!