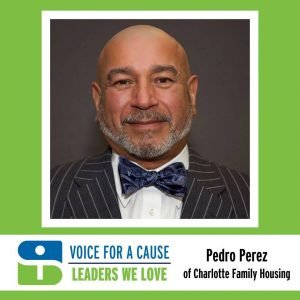 A conversation with Pedro Perez is an unforgettable experience. Not because of his brilliant smile and trademark bow tie. It’s because he is a rare mix of compassion, confidence, and humility. He is a servant leader. He speaks beautifully for the homeless in a way that generates deep understanding.

Two years ago, Charlotte Family Housing (CFH) was still fairly new. CFH was formed by three agencies combining expertise and resources to support working homeless families. When its board of directors interviewed Perez, a former brigadier general in the New York State Police, no one could have predicted the pandemic that laid in store for the community, or that Perez would fulfill his life’s mission by taking on the role of Executive Director.

Perez’s journey is the result of what he calls “hard work and resilience.” During his career with the New York State Police, he became the highest-ranking Afro-Caribbean in the history of the agency. He was a role model for a strong work ethic and a commitment to inclusivity. “I share resiliency with the families served by Charlotte Family Housing,” says Perez.

Here is a transcript of three key questions we asked Perez when he joined us on Human Touch this year:

What do we most misunderstand about the homeless?

Look at me, look at my mother. She was homeless in her first years in this country as an immigrant from Puerto Rico. She pulled us out of poverty by learning English and getting a GED. She went on to get her LPN, a bachelor’s degree and master’s degree. Eventually she became a nursing administrator for a local hospital.

The folks we serve who are living in poverty are hard-working people. They are not lazy. They are doing everything they can to change their lives, and they want the same thing that everyone in this room wants–to feed their family in a secure home that is their own. The invisible homeless are driving our buses and serving us coffee. They are working, but they are couch surfing, living in cars and staying at motels.

Talk to us about Affordable Housing.

Any one of us can end up being homeless. Think about the 2008-09 Recession. Many people found themselves in situational poverty, but they had the skills, contacts and social capital that allowed them to get back into jobs.

People who live in generational poverty don’t have social capital. They are struggling against barriers. They are working but they can’t afford a secure home.

What can we do?

As we educate ourselves on the reality of generational homelessness, we can ask questions and share our social capital.

Learn why the minimum wage is what it is. What are the barriers?

How do we engage to change the laws for someone to find their way out of poverty without shame?

Since the onset of the pandemic, Perez has worked to expand the Charlotte Family Housing’s definition of ‘working families’ to acknowledge the challenge of high unemployment. The agency has reached out to area landlords, partnering to actively save off homelessness. It is a strategy that led to a $75,000 grant from the COVID-19 Response Fund to increase rental subsidies for clients who have lost employment or income.

Charlotte Family Housing: Who We Serve