How to Craft a Meaningful Message

As members of an audience, we do not remember your message for your flawless grammar, sophisticated verbiage, the names you dropped or your multiple degrees. No, we remember meaningful moments when a handful of words resonate with us so deeply that we are changed. 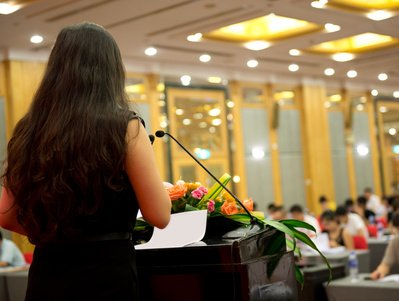 We remember the feeling behind a shift in perception or the new grasp of a concept that is presented clearly in a speaker’s message.

Simplicity: Boil It Down to Six Words

Michael is a friend who told me a story about meeting his hero, Jim Lovell, captain of Apollo 13, at a conference. He had watched the film, Apollo 13 starring Tom Hanks, a dozen times.

When Lovell took the stage for less than 15 minutes, Michael was frustrated. He wanted more from the man who said, “Houston, we have a problem.”

The next morning, Michael attended a smaller breakfast and heard Lovell tell his story. The room was riveted. Afterward, someone asked, “How does it change you to come through four or five days, knowing you’re probably going to die?” Lovell answered, “After that experience . . . I am not afraid to live.” Michael smiled and thought “That’s what I came for.”

In the context of Jim Lovell’s story, those six words (“I am not afraid to live”) created meaning. Of course, you must create the context, but then, use simplicity to allow your message to land in a meaningful moment like no piece of complexity ever will.

Allow for clear, powerful thought that pops out the big picture behind of your message.

The goal of speaking is to communicate clearly and powerfully. Sure, grammar is important on some level, but the spoken word is not just another version of the written word. The spoken word doesn’t travel well on perfect sentence structure. Your audience won’t even notice if use the subjunctive wrong, but they’ll be bored if your message lacks meaning. They will get very frustrated if you don’t make some kind of interesting point.

Some of the most meaningless minutes happen when someone reads a formal introduction of a speaker. “We are so honored and excited…the esteemed Dr…so-and-so received her doctorate at WXYZ…in as much…and serves on the board of ABCD.”

Years ago I heard a woman named Suzanne introduce Dr. Andrew Weil, who runs the program in Integrative Medicine at the University of Arizona. Instead of reading his impressive bio, she said, “Our speaker is a thought leader. You will find his formal bio in your program.” She went no further with his resume.

Instead, she told us that just yesterday, “he awoke in his stucco adobe house, just south of the Saguaro National Park, and spent time in a stone labyrinth for energy-assisted contemplation on his visit with us today.”
Now that’s an introduction!

Avoid Jargon In Your Message

When I left broadcasting I discovered that the world was not impressed by jargon like “remote,” “cume,” “ADI,” “rating sweeps,” “reach” and “frequency.” Later I would think about my presentations at conferences and how I excluded people who were not in the broadcasting industry with my speech.

What industry terms are you using? Your audience might be in your industry, which gives you some leeway with primary terms but don’t exclude people who are outside of your industry with the latest jargon. They will feel left out and we will tune you out.

Many industries are packed with the buzz words we hear all day and give in to a sense of belonging—but it can also hide the meaning in the message.

Give the Audience an Upside In Your Message

Recently I heard an executive speak whose keynote sounded something like this: “Last year, our out-of-the-box thinking allowed us to build greater bandwidth for the projects that will take us to the next level in the months ahead. As we take a 30,000-foot view, the head room in our industry lies in right-sizing for efficiencies, synergy with our solutions providers, and exceeding expectations during client engagements. The landscape is shifting and becoming more complex, and we can no longer rely on blocking and tackling. It is mission-critical to synergistically leverage knowledge and relationship capital to future-proof assets.”

His message disappeared beneath language that sounded hollow. “Give them some straight talk,” I thought.
The only thing he left the room with was a vague sense of impending doom. People want an upside.

How to Infuse Meaning Into Your Message: Eight Tips

I believe it’s your job as a keynote speaker to be a dispenser of meaning—and hope. How many people would come to hear you speak if they knew you were going to bring them down and leave them there, without a meaningful way out? What is the context and the big idea?

Here are some steps for making meaning the centerpiece of your message:

Your Guide to Authentic Speaking and Presenting is packed with rich material and innovative tips to help you become the communicator you were meant to be…and it’s FREE! Just click the download button.