How to Facilitate Like an Expert: A Case Study

Home / Interact Studio Stories & Articles / How to Facilitate Like an Expert: A Case Study 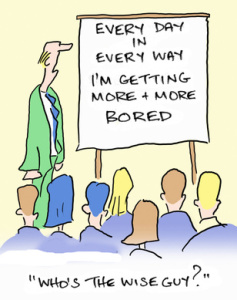 A coaching client, Thomas*, recently came to me for some help. He’d just been identified by his organization as a “high potential,” and he had been enrolled in their leadership development program.

And then reality hit. They expected him to facilitate a four-hour course on the basics of the firm to a group of fellow employees, and this class was well-known to be boring, dry, and uninspired. Everyone dreaded attending it, and my client dreaded teaching it even more. He needed to know how to facilitate like an expert, and he needed to know it fast.

Thomas asked me to give him some tips and techniques for facilitating the class. He was looking for a quick reference guide for an instructor to “reduce the torture” for the class participants.

I told Thomas that the best tip I could give him wasn’t a tip at all. It was already within him. I asked him what would happen if he shifted his thinking:

• FROM “I’ll let them down because I’ve never taught a class before” TO “I can wow them with my fresh ideas because I won’t be held back by the way it’s always been done.”

And wouldn’t you know it, he grew into that aspiration! He came up with ideas—from including music to incorporating games—that were much better than any “tips” I could give him. Even greeting the participants one-by-one as they came into the room set the stage for ways to incorporate individualized ah-has throughout the session.

He got feedback from both his peers and his leaders that this was the best class they’d ever attended at his firm. They didn’t want it to end. His leaders have asked him to work his magic on other classes, too.

And an added bonus: a promotion for Thomas.

What was the secret to transforming this meeting?

Our own thoughts can either be dams or catalysts to our success. It’s so simple we often overlook it.

By shifting his thoughts first, Thomas took a different set of actions than he would have otherwise taken (even if I had given him facilitation tips), and the results were phenomenal.

Want to change your results? Change your thinking – the actions and results will follow suit.

I recently asked Thomas what he felt most contributed to his success. He said, “Thinking drives actions, and actions drive results. I had no idea how much that one concept could create wins for me, both inside and outside of the classroom. It’s not only improved my work life, it’s paying dividends in my personal life, too. I would have never guessed that shifting my thinking would not only help me facilitate, it would help me get a promotion, too.”

* The client’s name has been changed to honor his confidentiality.