2020’s most binge-worthy story of acceptance and belonging 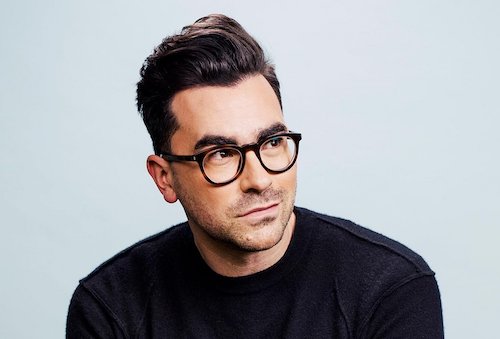 If I have to choose between Anderson and Dan/David, the choice is pretty simple. I choose Schitt’s Creek because it makes me laugh and cry, but mostly laugh, and the news just raises my blood pressure and makes me cry. Laughter wins. Plus, I still have Chris Cuomo.

I discovered Schitt’s Creek in early 2019 at the recommendation of my college roommate. The premise of the low-budget Canadian comedy was intriguing; an uber-rich family loses everything and moves to a small nondescript town, Schitt’s Creek, purchased by the family patriarch as a funny gift for his adult son.

It took a few episodes for me to warm up. In the early series, the Rose family is not terribly likable; they are deeply selfish and bitter. Over the six seasons of the show, the Roses remain deeply selfish, but the little town softens their blunt edges and brings them together.

All are Welcome at the Rosebud Motel

In a year when tolerance and acceptance are aspirational, Schitt’s Creek, the town and the show, live up to the slogan on the town sign: “Where everyone fits in.” 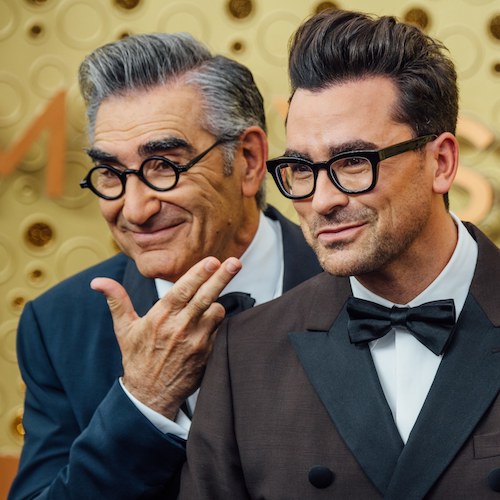 Age, race, sexual identity do not matter in Schitt’s Creek, humanity does. With fans as diverse as the show (Mariah Carey, Madeline Albright, Steph Curry, and Doug the Pug to name a few), Schitt’s Creek is a safe pandemic escape and provides a GIF for every occasion.

This little Canadian masterpiece is the brainchild of Eugene and Dan Levy. You may recognize the elder Levy from the American Pie movie series or a series of collaborations with Christopher Guest (Waiting for Guffman, Best in Show, A Mighty Wind).

The Levys shared showrunner responsibilities for the first season in 2015 with Dan Levy taking over for the remaining five seasons. The show made its way to Netflix in 2017 and found a whole new worldwide audience. In March 2019, Levy announced that Schitt’s Creek would return for a sixth season which would be its last. The sixth season concluded on Pop TV at the end of April 2020 and hit Netflix in October.

The show became pandemic viewing as the Rose’s trapped in their town reminded us of our own confinement. And perhaps the unbridled hopefulness of this unremarkable town, inspired us that brighter days lay ahead.

After a few Emmy nominations in 2019, Schitt’s Creek received a nomination in every comedy category in 2020. And they won them all. When asked about the sweep and the relationship to the pandemic, Levy said, “It stopped being about ‘Oh, this is a funny show’ and started being about ‘I need joy in my life.’” 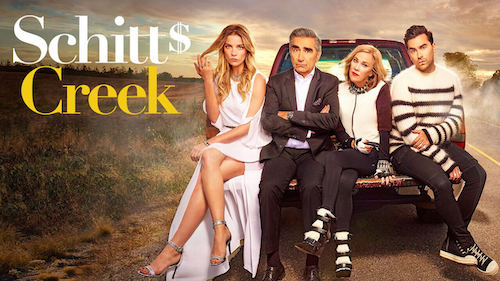 Then in November, Levy made his debut in People Magazine’s Sexiest issue as the “Sexiest Man in Quarantine.”

With typical humor, he reminded us of our own quarantine explorations. He cooked the bread, the banana bread, the pasta, the cookies we all saw on Instagram until he realized, “All it did was remind me that I should be saving my money and ordering food so that someone else can do it for me.” He tried the puzzles, but acknowledged, “I am too short-tempered for a puzzle so I try not to walk down paths that I know are just not going to be good for my spirit.”

And in the photo spread he is sneaking a recycle bin full of wine bottles to the curb. He’s just like us. In a year when we needed to laugh and we needed to be hopeful; he and the Schitt’s Creek team provided.

Don’t be Anderson Cooper. Watch Schitt’s Creek. Then contact us if you need help telling your own award-winning story.

As many of us were trapped at home during the pandemic, Dan Levy offered us something we all needed — escape. We were able to escape to the small town of Schitt’s Creek to meet an eclectic cast of characters who gave us a sense of hope. Off the screen, Dan’s authentic spirit shined just as bright. He kept us smiling through 2020.