We lost Chadwick Boseman over the weekend. The loss hurts on so many levels.

Boseman was a native of the Carolinas, growing up in Anderson, SC and attending T.L. Hanna High School. His 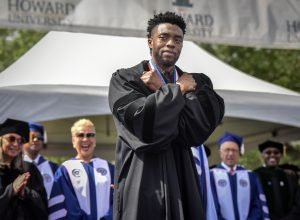 WASHINGTON, DC – MAY 12:
Actor Chadwick Boseman gives a Wakanda salute to the crowd as Howard University holds its’ commencement ceremonies on May, 12, 2018 in Washington, DC.
(Photo by Bill O’Leary/The Washington Post)

mother was a nurse and his father worked for an agricultural conglomerate and had a side business as an upholsterer. He played basketball in high school, but he turned to theatre when he wrote a play about a classmate who was shot and killed.

He became one of the most sought-after actors of our generation, playing roles of a lifetime, time after time. And we learned on Saturday he did some of his most acclaimed work while battling colon cancer and related surgery and chemotherapy. The tweet on his personal twitter account announcing his passing and accompanied with a photo featuring his incomparable smile has become the most liked tweet of all time. He was, after all, a superhero.